There have been many articles written over the last few years about solar power reaching grid parity. For example, below is a diagram developed by the Department of Energy in 2008, predicting the trajectory of cost of solar power, utility rates and the arrival of grid parity. Generally speaking, it turned out to be quite accurate in regards to the timing of grid parity. What it was less accurate in predicting, was the increase of electricity rates across the US, first on the East and West coasts, and more recently across the rest of the country. 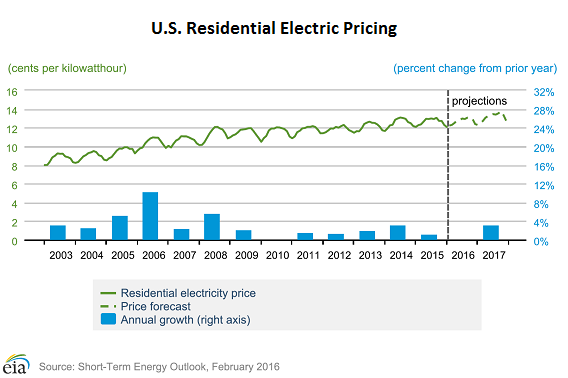 Solar power is now cheaper than utility-generated power in the vast majority of the largest cities in the US. In an article written by Green Tech Media over one year ago, Jim Kennerly, project manager for the Going Solar in America report, was quoted as saying, “Right now, buying an average-sized, fully-financed solar PV system costs less than electricity from their local utility for 93 percent of single-family homeowners in America’s 50 largest cities, and in most places, is a better investment than many of the stocks that are in their 401(k). Nevertheless, most people are unaware that solar is this affordable for people of all walks of life.”

The North Carolina Clean Energy Technology Center found that, although many of the cities where solar energy is competitive are on the East and West coast, solar is also competitive in cities such as Kansas City, Wichita, Atlanta, Milwaukee, Columbus and other smaller markets. As energy rates continue to rise across the US, the number of cities reaching grid parity continues to increase. Furthermore, a solar system purchased today with a good payback at current energy rates, will see realize even better payback results as energy rates continue to rise. So, in addition to providing a sound investment today, solar also provides “a hedge against rising power costs” of tomorrow.

At Cornerstone Solar, we are committed to helping provide clean, effective solar power to our customers. Our area of focus is commercial, industrial and utility-scale solar systems. Over the years, we have seen solar panel efficiency increase dramatically. Now, as energy costs continue to rise, solar has become one of the highest areas of energy investment on the globe and is fast becoming one of the primary sources of power worldwide.

We would be happy to review 12 months of your electric utility bills and provide a free system predesign and business analysis for your facility.